What I love about London

Last week a man took a car in a part of London I know well and drove it into the crowds.  He then stabbed a police officer to death.  This was near where I'd been only days before along with the millions of other people who pass through Westminster every day.

If this is all you read it may make you fearful or lacking in hope.  For me, it didn't.  Last week was a fantastic example of the spirit of London and of British people.  It took me years to "get" London.  When you only travel at rush hour, it can feel cold and unfriendly.  It's not all that surprising because if you have your body pressed up against strangers for an hour, it's not the most pleasant feeling.  It would be wrong though to see London and Londoners as unfriendly, it's not true.


London is a huge melting pot of cultures and nationalities.  Many people (even British people) who live in London weren't born there and that makes it the most dynamic and interesting place I know.  It has some of the best restaurants in the world and once you scratch the surface, it is anything but unfriendly.

After the attack, I took some time to read the news reports of people coming together, doing the right thing and being good people and there were so many of them. 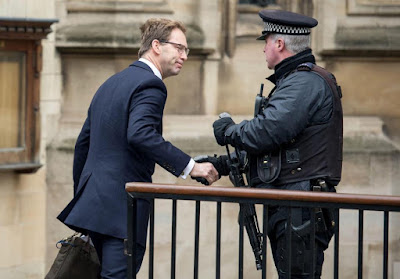 Tobias Ellwood is an MP.  During the chaos as the police didn't know if more attackers were involved and everyone ran away from the unfurling tragedy, Tobias ran in and tried to help save police officer Keith Palmer's life.  The picture of him stood up, blood on his face with despair that he couldn't save him was widely shown but what I really loved was the reaction of the police guarding parliament the next day, that simple handshake summing up the understated nature of Brits and what everyone wanted to do (well that or pat the guy on the back and buy him a pint.)

So many of the people running towards what was happening were there for their jobs.  I have no idea how that must feel to be the first police on the scene, the first paramedics and those paramedics fought to save not only the lives of people the attacker killed but also the attacker himself.  That is what being a civilised nation is. 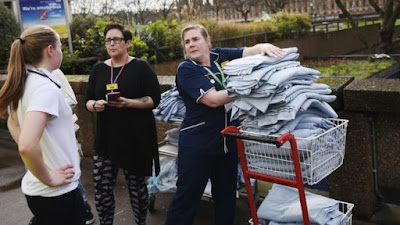 Near to the area where it all happened is St Thomas' hospital.  Medical staff St Thomas' came rushing in with blankets and support for the many injured again, running towards potential danger just because they are decent people who wanted to do the right thing. 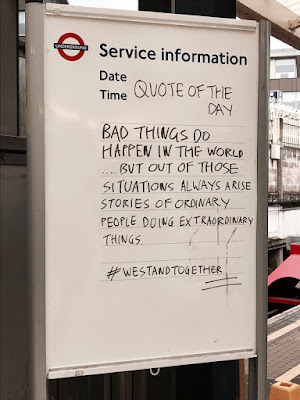 But for all the tales of courage and support, the thing which lifted my heart most was the many messages of resilience, loads of which appeared in London's many stations.  There is a feeling about London that this isn't even slightly enough to dent our spirit and that is the thing I love most about this fine city.  #WeAreNotAfraid
Created by Heidi at 11:31:00