Moules mariniere (or my version of it anyway).  I'm not convinced traditionally that it's meant to contain cream or garlic for that matter but I don't care.  I like it with both! 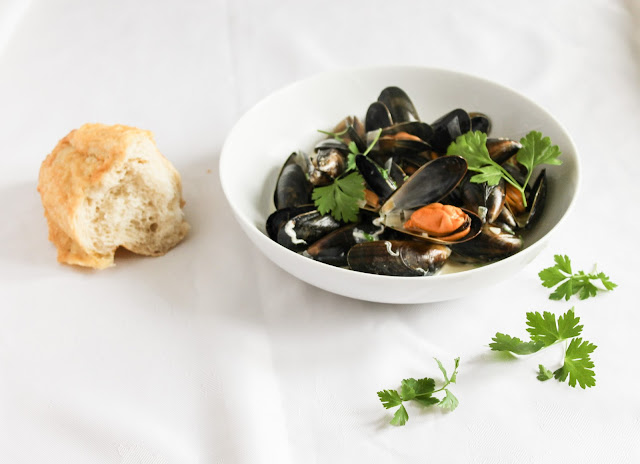 Mussels can be surprisingly cheap to buy, this is less than £2 worth and, although I never have, they are so abundant on our shores, if you're sure of the water quality, you could even do a bit of foraging.

The key thing is to make sure that the mussels are live.  I will explain below.

I love feta cheese.  This is a way to combine lovely salty feta cheese with sweet roasted peppers. 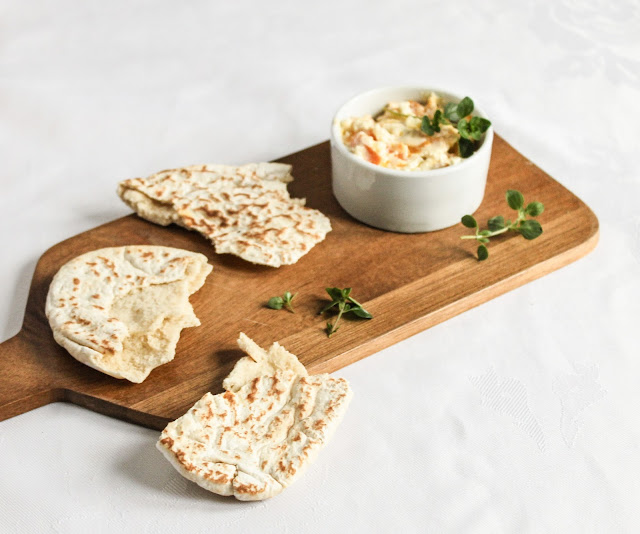 This is a great way to use up a bit of yogurt in the fridge.  I have to admit I did have some because I've recently discovered proper Greek yogurt for my very berry breakfast bowl and have been spoiled for the "Greek Style" stuff. 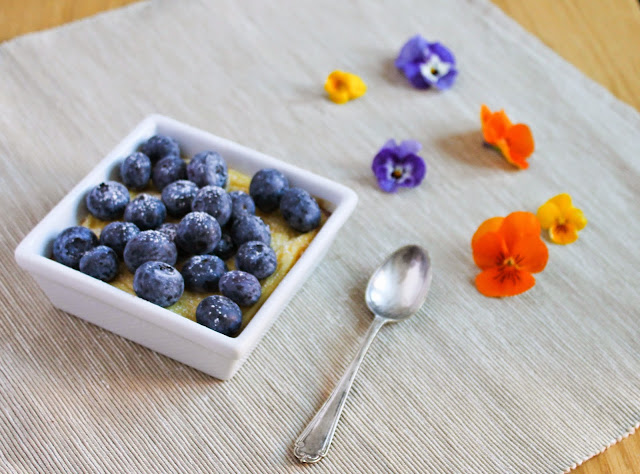 I don't have a gluten issue but many people do of varying degrees.

Coeliac disease is thought to affect 1 in 100 people (source Coeliac UK).  One of my friends has recently been diagnosed with a wheat allergy (as in he can get anaphylaxis if he eats wheat).  Personally I love bread but not out of any desire to cut it out, I find if I eat it more than once a day in I just feel a bit heavier and sluggish.  I suspect this has more to do with the fact I like toast with lots of butter on it and I do find slower fermented breads like sourdough are better but still, wheat is something I naturally don't eat every day because it doesn't feel like my body likes it that often.

As a result, there are lots of naturally gluten free recipes on my blog.

I have had a real awakening to the variety of meals which I could have at breakfast time recently.  I have no idea why I used to eat cereals every day.  I once did a "7 a day" challenge where I tried to fit in 7 fruits and vegetables into my diet every day.  Surprisingly I found it hard when nowadays I think it would be a breeze. 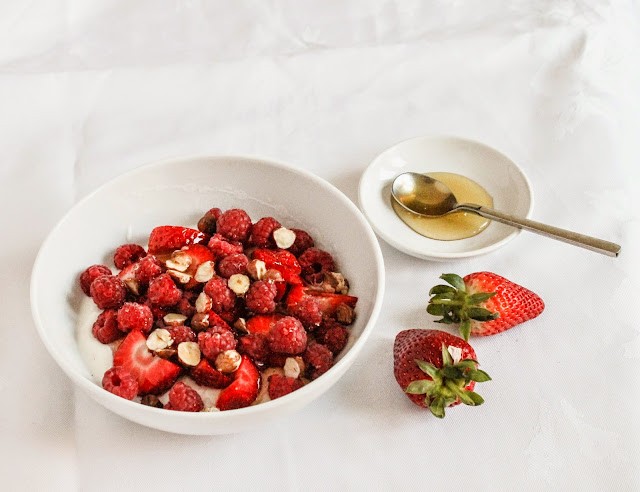 Email ThisBlogThis!Share to TwitterShare to FacebookShare to Pinterest
Labels: Gluten Free, Other stuff

A delicious and very simple strawberry tart.  Great for when you need a quick pudding.  Although I've put this into my "one hour to cook" section, in fact the pastry is so quick, it's only the time to cool which takes any time at all.  In reality, this is only 10 minutes of any effort, if that. 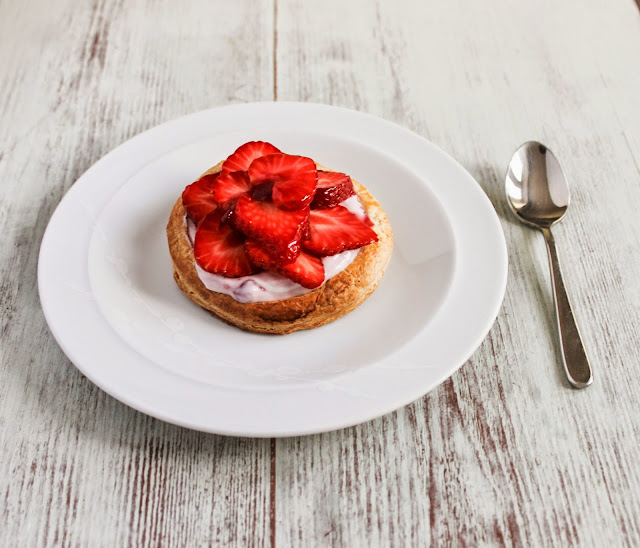 Email ThisBlogThis!Share to TwitterShare to FacebookShare to Pinterest
Labels: 1 hour to cook, Dessert

A lovely combination of steak with fresh vegetables and a spicy, salty, sour and sweet dressing. 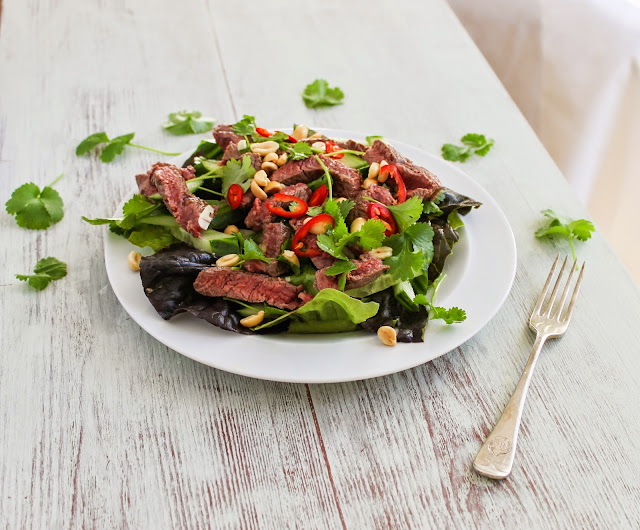 I've never been great at drinking loads of water, even though I know I 'should', it's meant to be great for your health and weight loss.  Soft drinks, juices are getting an increasingly bad reputation.  This is just a way to make water more interesting and it's pretty lovely.  Play around with different flavours.  Mint, lemon, berries, spices...

Think of all of those bottles of "flavoured water" you can buy with artificial flavours, sweeteners, £1 or more a bottle.  This is mostly from your tap, makes you feel virtuous and I intend to have a bottle with me of something lovely all summer! 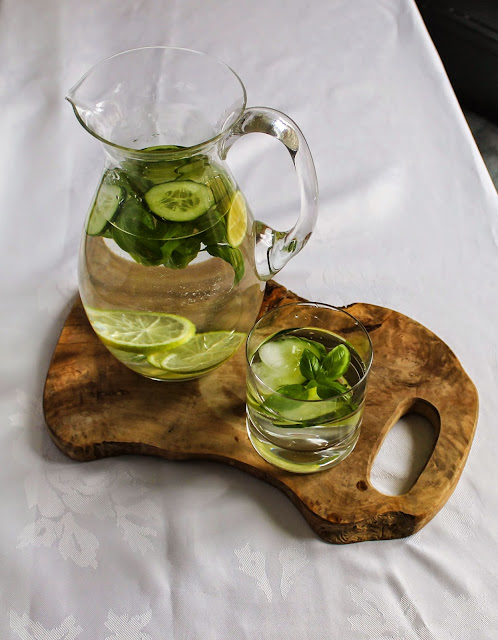 Muesli as you buy it in the shops isn't all that healthy an option.  Filled with dried fruit nuts and often added sugar, it is one of the more calorie filled breakfasts you can have.  This wasn't how it was originally designed.  Maximilian Bircher-Benner was a Swiss Doctor, he believed people should exercise frequently including gardening and eat a lot of raw fruits, vegetables and nuts and limit meat.   Although my lifestyle doesn't always mirror his proposal, I have found my recent inclusion of a vegetable patch in my garden is good for both body and soul.

It's a bit difficult to be sure what his original recipe was but certainly from the sources I've found, oats and apples seem to be obligatory.  Opinions seem to differ on whether it should include milk or yogurt or even cream.  Many include lemon juice which I don't due to the amount of other fruits I include which even at their ripest, also have a slight acidity.

Not everyone sweetens the recipe either.  I included a touch of honey and I will leave that up to you whether to include or not.  It's not a necessity if the fruit is ripe, in fact you could easily make this vegan by using nut milk and missing out the honey.

This is my massively fruit filled take on Bircher Muesli.  I hope Dr Bircher-Benner would approve. 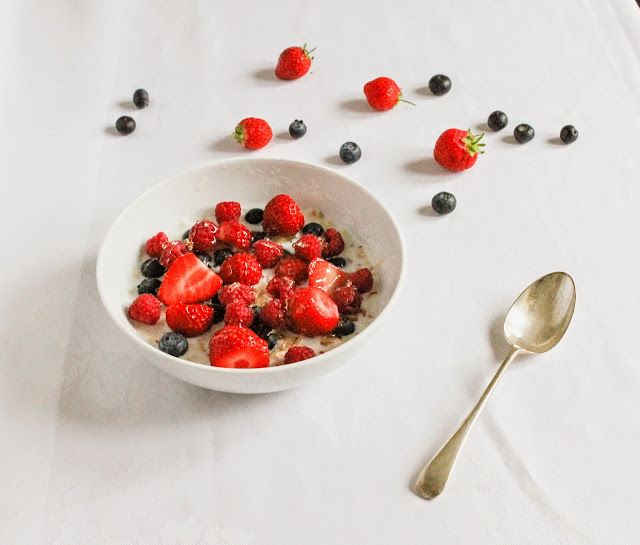 A very simple sticky chicken with ginger.  Great with salad either hot or cold. 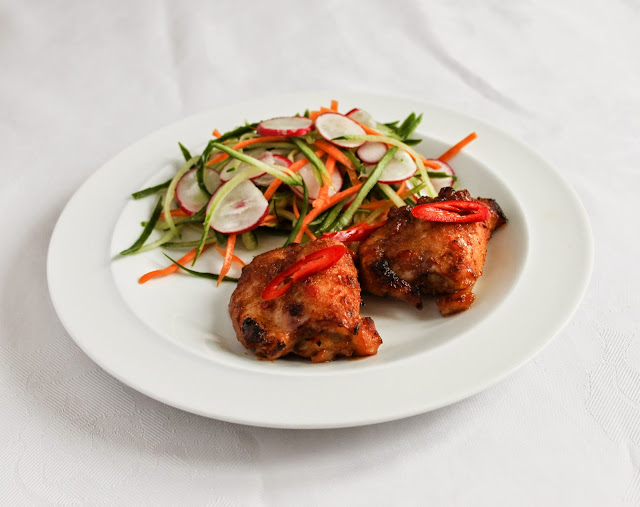 Parfait?  Ok well it's layered so I'm going with it.  This is a delicious and filling breakfast containing three different fruits, good fats from the walnuts, protein from the yogurt and fibre from the bran.  Oh and it's delicious, did I mention that? 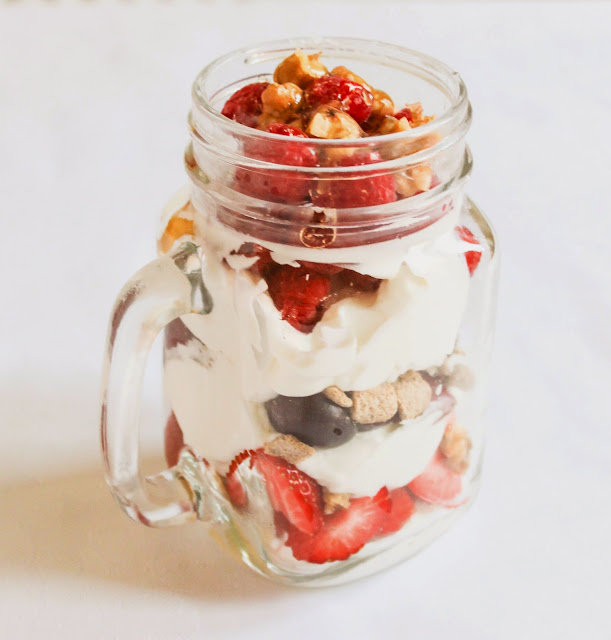 Watermelon salad might sound like an odd concept but remember tomatoes strictly speaking are a fruit.  The sweetness of the watermelon with the saltiness of the feta and peppery leaves is a bit of a joy.  Give it a go. 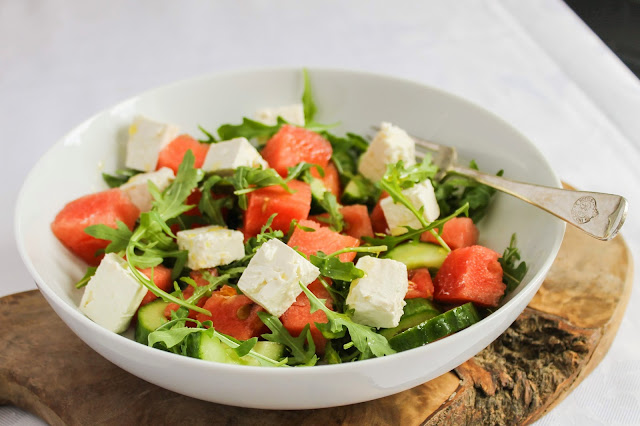 Meatballs used to be a labour of love for me.  When I was cooking for a larger household, I would start cooking them on a Saturday in the morning and they'd be done at about the right time for our evening meal.  It was crazy but it was something I did with love.  It was a way of saying "I love you, I'm prepared to work for hours to make you this meal."

But cooking for yourself?  Even I find that hard to motivate so I've stripped back my original recipe from the combined beef and pork and the slow cooked sauce made with tomatoes, pepper, onions, etc, etc.  This is simplified but still delicious.  I would go so far as to say I barely notice the difference which then makes me wonder how I get those hours of life back...

With meatballs, I'm greedy.  I love the meatballs and sauce on their own.  When you look at the ingredients, it's not that unhealthy but tastes like you're having a much bigger portion than you actually are because it's only 2 sausages but you could make this go further by serving with pasta, then it would be a very thrifty meal. 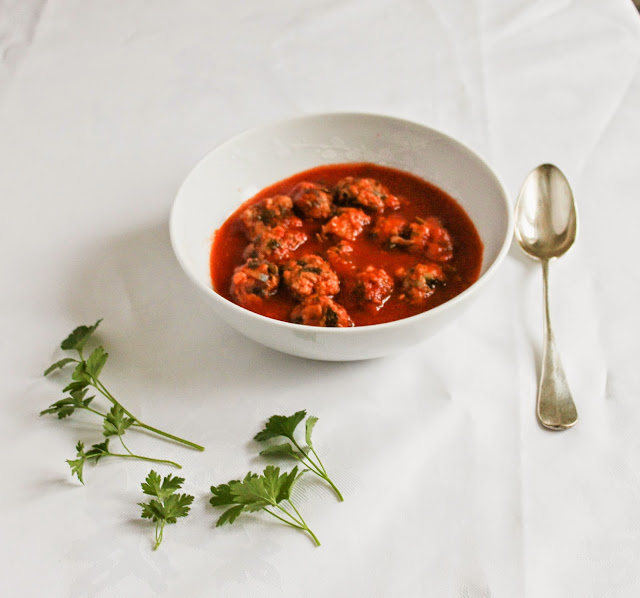 A delicious and quick salad of warm chorizo and chickpeas with rocket and tomato.  This was after a long day at work and very quick to make. 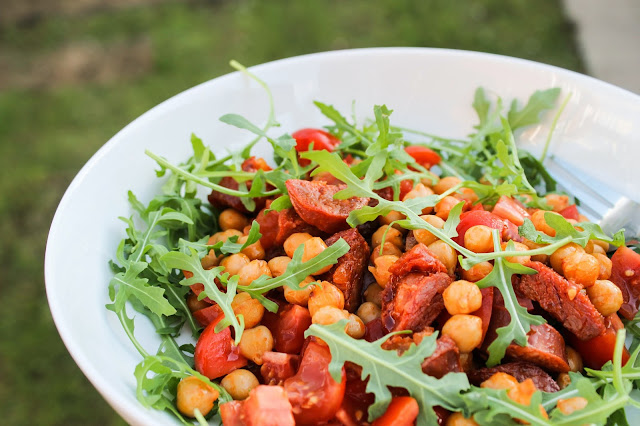 Gazpacho is something I've played around with recipe wise for a few years, trying to get the best combination.  This is the best version I've done so far.  It's the first time I've included bread and now I'm never going to exclude it again.  The combination of fresh tomatoes and the (slightly cheating) passata helps the colour and flavour with the early season tomatoes but do buy a decent variety for the fresh or it will be lacking the vibrance and depth of flavour. 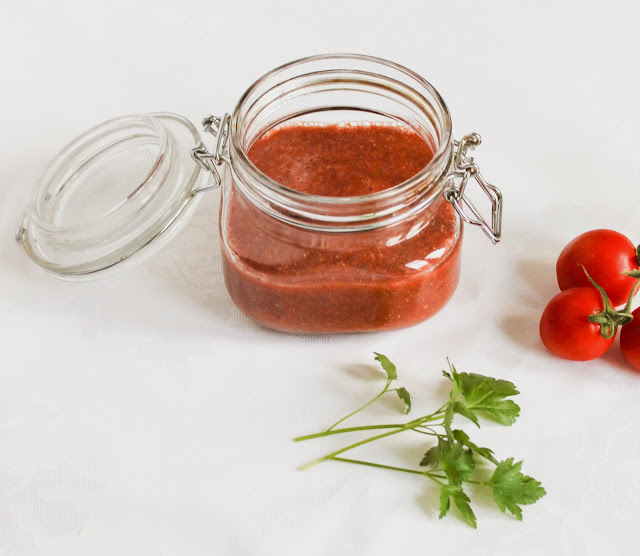 Occasionally I want something really full of fruit for breakfast but this would be equally good as a dessert.  Zingy, fresh and full of great stuff. 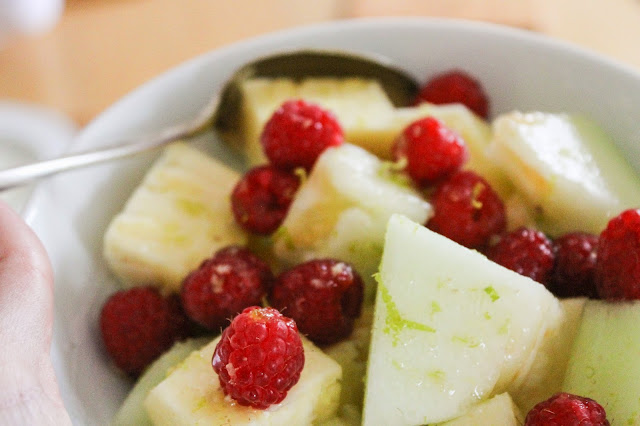 I love pan con tomate (or pa amb tomaquet) when I'm on holiday.  It elevates the most humble sandwich or toast to something so much more. 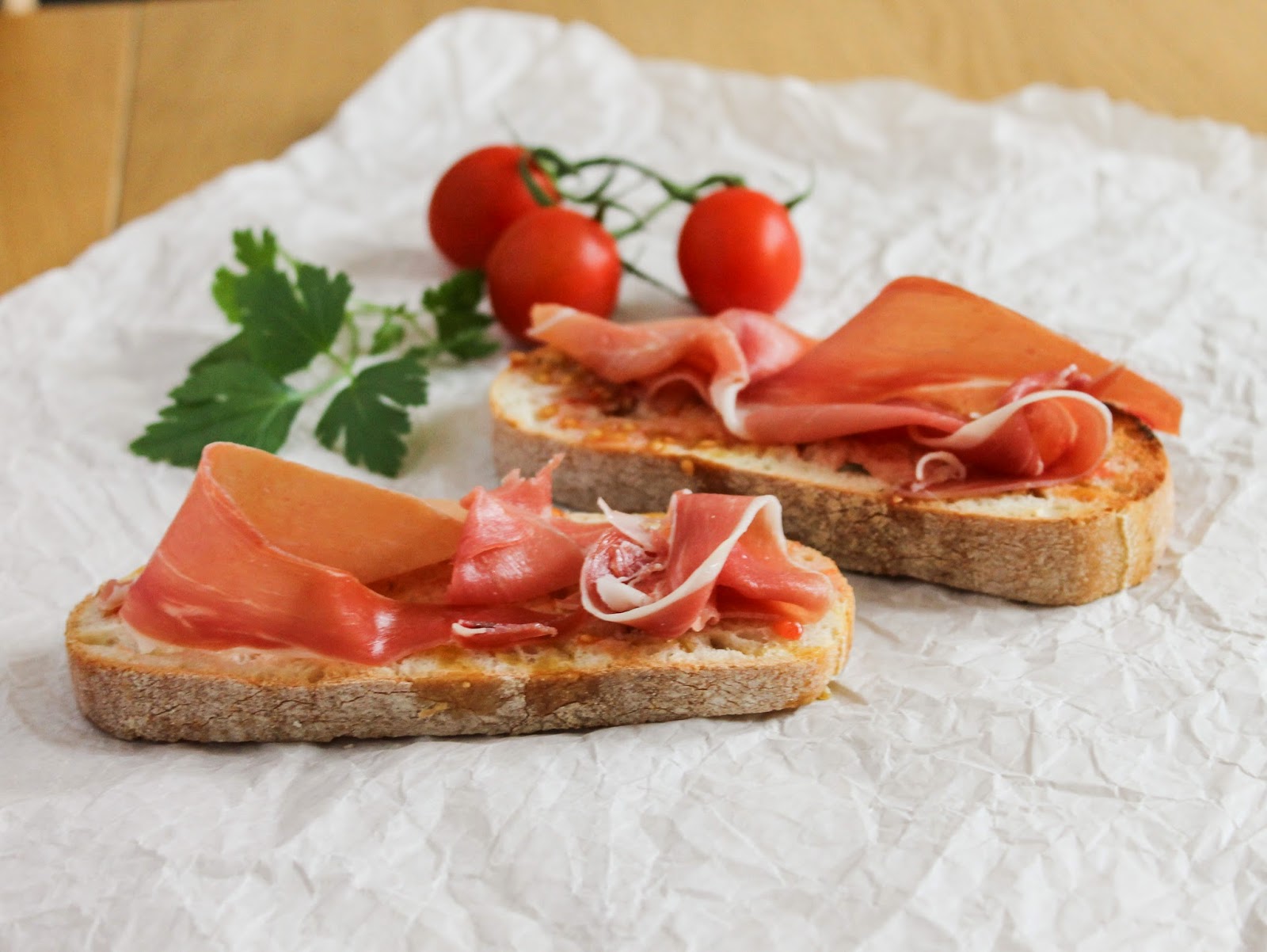 After making my white chocolate and raspberry layer a few days back, I had some quark left in the fridge.  In a moment of inspiration while running, at 6:30am (madness), I realised that quark could be a great ingredient for a sneaky protein rich breakfast as it's over 10% protein by weight.  It's the Tuesday after a long weekend, I needed something to lift my spirits so the quark pancake was born. 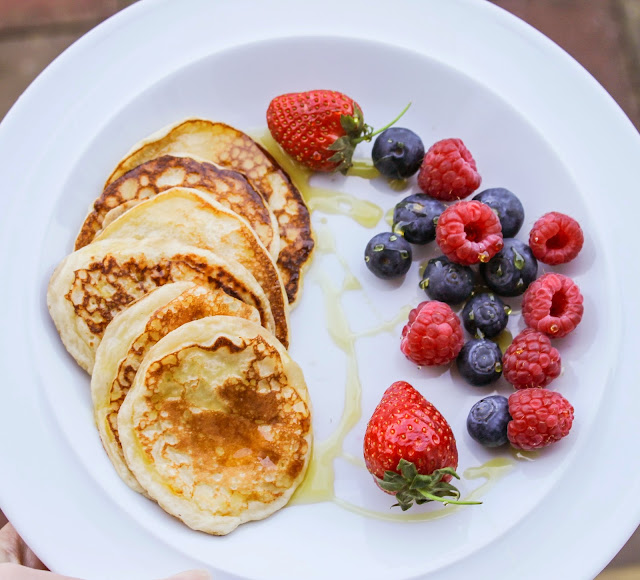 Whole Prawns with Garlic and Chilli

I am a sucker for a reduced section and in my local shop they have a decent fish counter, the majority of which gets packed up for the reduced section for bargain hunters like me.  I am not normally a fan of reduced fish but these prawns looked great, firm, bright eyed so I snapped them up.

Ordinarily I would have got out the barbecue and making this on the barbecue would be lovely but it seemed like too much faff.  So a quick treatment in the pan was in order. 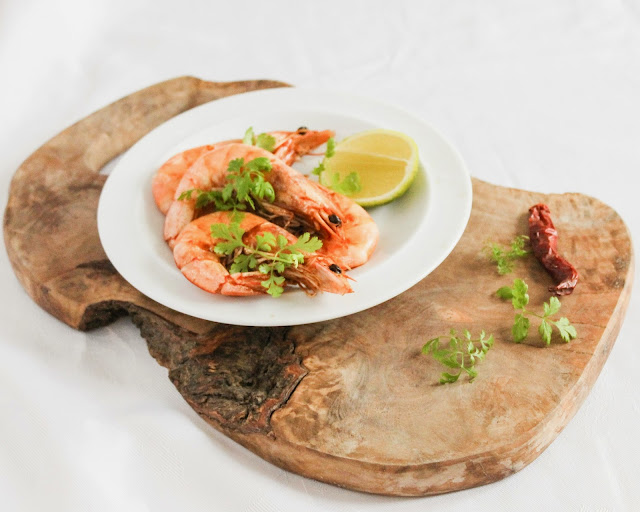 Oh so retro.  To be followed by a steak and a black forest gateau... possibly!  Well the 70s are back if fashion magazines are to be believed, so why not? 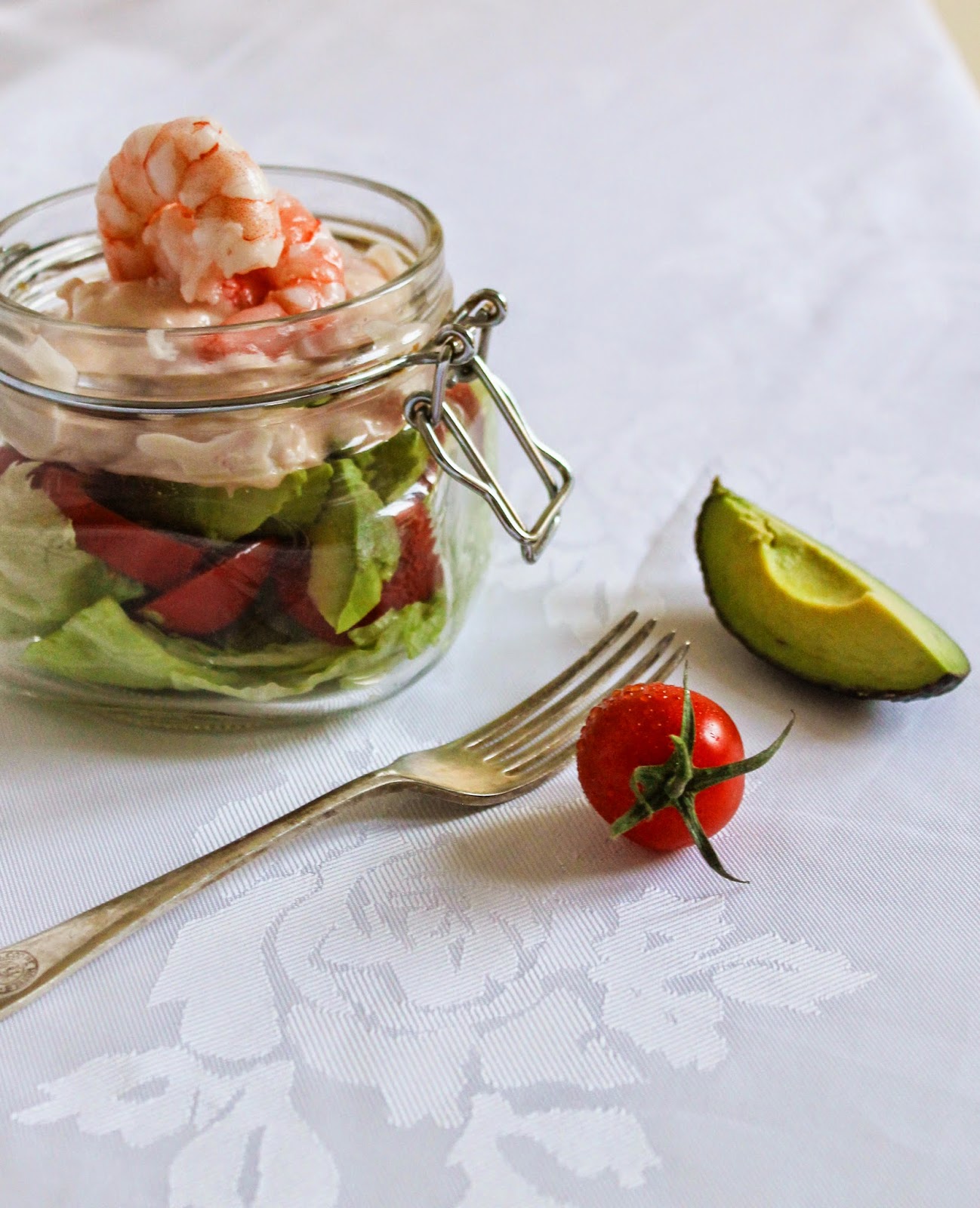