It feels so wrong to just call this "fish soup".  This is an awesome fish soup, a soup delicately flavoured with thyme, a touch of spice from chorizo and chunks of delicious fish and shellfish.  I'd had a hard day when I came up with this recipe.  A day where I needed to cook for myself something really good, something which would really make myself feel loved!

My idea started at the fish counter where there were a few mussels left at the end of the day.  Some fantastically fresh looking gurnard and an idea was born. 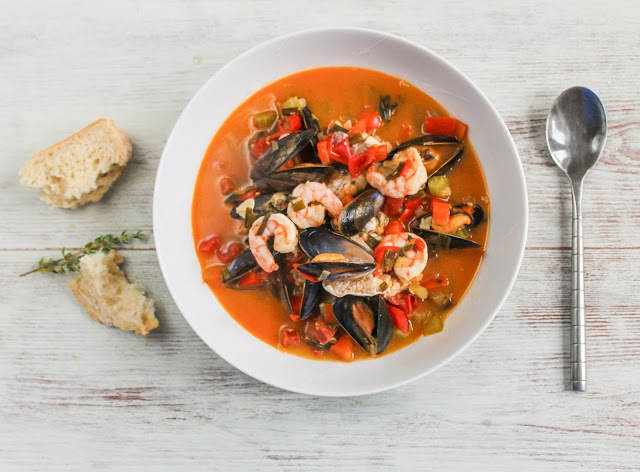 Prepare the gurnard by gutting the fish and cutting into two pieces cutting off and discarding the head and tail (or alternatively make stock from these parts).  If you ask your fishmonger nicely, they might do it for you!  (I'm not a fuss pot when it comes to fish bones so I left the gurnard on the bone.  I'm convinced cooking fish on the bone where you can gives you more flavour.)

Clean the mussels by running under a tap.  Then check any which may be open.  If at all open, give a small tap on the side of a bowl, if it doesn't close, throw it away.

Prepare the prawns by cutting down the back to "devein" them.  If a dark vein is present, take it out. This improves the flavour and also makes the prawns look prettier when they're cooked.

Chop the onions, pepper and celery.  Fry the chopped vegetables in the olive oil until softening and slightly coloured.  Add the chorizo and garlic and fry for a minute or two more.

Pour in the white wine and thyme leaves and boil until nearly evaporated, add the water and bring to a simmer.

Serve with some crusty bread. 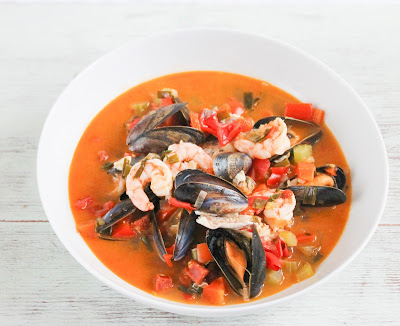 I had seen gurnard as a fish used in soups and stews but until I researched it I had no idea how sustainable it was.  In fact it is often a bycatch and often discarded due to low demand.  How much waste is that?  What's more is it's absolutely delicious in this soup.  A fantastic, firm textured fish, it was probably my favourite part.  This is before you get to the price.  Although I accept that I've not chosen the cheapest ingredients to accompany it, the gurnard and the mussels together cost me 97p.

This is where Jamie Oliver gets himself into a lather about people who eat processed foods when on a budget.  It is possible to eat well on a limited income if you have a little knowledge and what's more, the cheaper fish are often the more sustainable.  I've had fantastic sprats and dab from local great fishmongers (and better stocked supermarkets) for astonishingly good prices.  It's worth a look again at some less popular species next time you're near a great fish counter and be brave... After all you'd spend less on a hamburger from McDonalds and gurnard is coming into season just about now.
Created by Heidi at 20:39:00