"Lack of exercise kills as many as smoking"

This was a quote someone said to me recently when she was talking about a mutual friend she'd been trying to encourage to exercise. 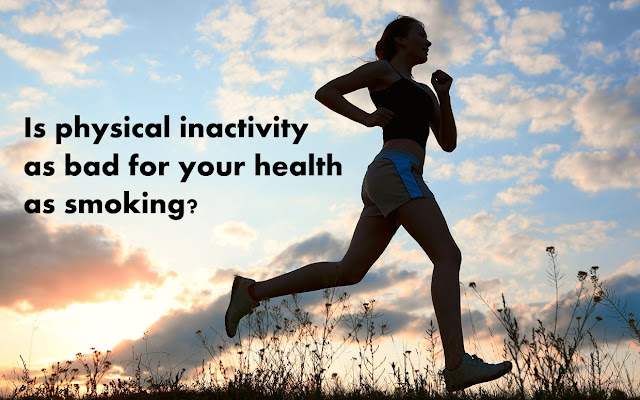 
So what is the evidence on exercise?  Well I found the source of the statement which was a paper in the Lancet from 2012.  It estimated that physical inactivity caused 9% or 5.3 million premature deaths each year.  Interestingly in a stat which is rarely reported, although averages ranged by location it wasn't heart disease or type 2 diabetes which had the big increases due to inactivity (c. 6% and 7% respectively) but cancer with a 10% average rise in breast and colon cancer caused by inactivity.  Wow.

Compare this with WHO statistics on smoking where approx 5 million p.a. die directly as a result of smoking (a further 1 million through second hand smoke) and you can see where the headline comes from.

So is the claim justified?  It is probably simplistic.  The WHO estimates 1.1 billion people smoke in the world which is just over 20% of adults.  Globally it estimates 25% of adults are not physically active enough. It's a small difference but an important one, physical inactivity is slightly more common on a global scale than smoking.

But is this significant?  Is it a fair thing to say that "not exercising is as bad as smoking?"  Yes and no.  Population risks are not the same as individual risks and there was some criticism on the paper and how the activity was mentioned.  It's also fair to point out the original Lancet paper didn't make the claim itself.  That said, the relative numbers are interesting and are worth pondering on.  While smoking is likely to lead to more ill health in older age, so is physical inactivity so it is worth thinking about both side by side and recognising that inactivity is a major health threat.

So if you're a non smoker, don't eat too unhealthily, perhaps don't drink much, you're probably thinking you're good on preventing cardiovascular diseases, cancer and heart disease?  Well it is genuinely time to wake up and realise that exercise is probably one of the most important things you can do.

So let me tell you my personal story.

Just over 5 years ago, I started couch to 5K.  I was overweight, unhappy and unconfident in myself.  I hadn't run since I was 14 and had never found an exercise class I'd liked.  I'd dabbled with gyms but found my attendance waned due to not enjoying it.

But then couch to 5K meant I really got into running.  On days I couldn't run, I discovered it was possible to do a decent work out in 30 minutes by doing HIIT, strength or supersets and I can honestly say I wish I started earlier than I did.

Exercise has improved my physical health, my weight, my appearance and my mental health.  If I miss more than one day, I notice it in my body and in my mood.

Give it a go.  I can genuinely say, even when I have to drag myself out of the door for a run (I don't leap out with a smile on my face every day) when I've finished and I feel the sense of accomplishment, I never regret it.  Don't just do this for the health benefits, to be able to keep up with your kids, to have more years of healthy old age or just to look better, do this for you.  This is you time, make the most of it.

I've linked up to the healthy, happy, green and natural party hop.
Created by Heidi at 07:17:00

Email ThisBlogThis!Share to TwitterShare to FacebookShare to Pinterest
Labels: Exercise, Other stuff