I love vegetarian Indian food.  There are so many vegetarian people in India (a quick google search said 31%) and figures from the UN says India has the lowest rate of meat consumption in the world.  These has my favourite vegetables in a curry, chickpeas (garbanzo beans) and cauliflower give substance and make you feel full without meat.  Long before cauliflower was trendy, Indians were using it in curries. 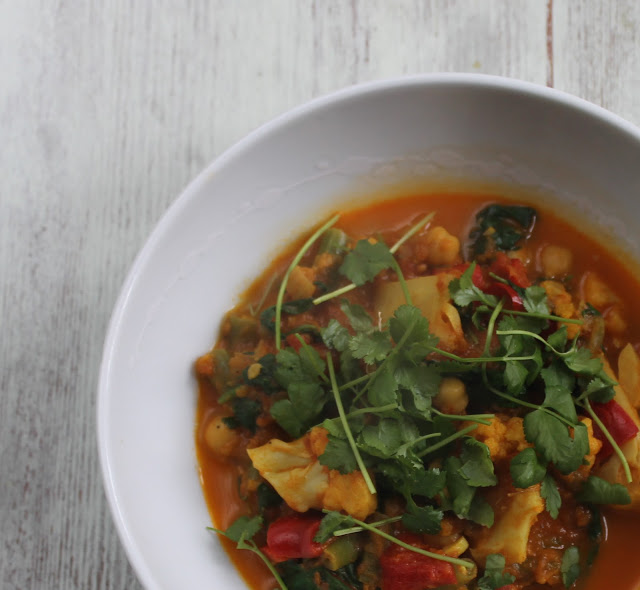 Finely chop half the onion and grate the other half.

Fry the chopped onion in the oil for at least 5 minutes or until browning and softening.  Add the cumin and mustard seeds and heat until the seeds start to pop.  Add the chopped garlic, ginger, tomatoes, sugar, fresh chilli, turmeric, chilli flakes, cinnamon, pepper and bay leaf to the pan.  Bring to the boil then reduce the heat to medium.  Cook out the paste for 15 minutes stirring regularly and adding water when it becomes too dry and looks like it might burn.  Only add a little water at a time, you want the paste to cook out.

When the paste is cooked, add the cream, cook for a minute then add about 3/4 of the boiling water.  Bring to the boil for a couple of minutes then add the chickpeas, pepper, chopped green beans and chopped up cauliflower to the saucepan.  Simmer for 10 minutes or until the vegetables are cooked adding more water if needed.  Remove the bay leaf and cinnamon stick. 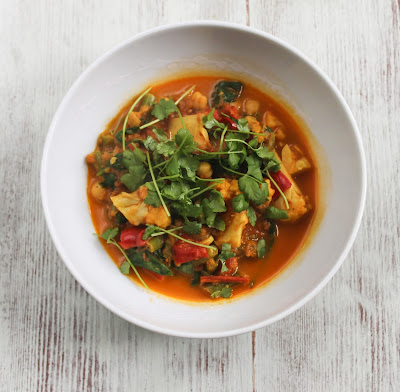 Chop the spinach and add to the pan with the salt.  When wilted, take off the heat and add in half the coriander, stir in.  Put into a dish and sprinkle with the remaining coriander before serving.