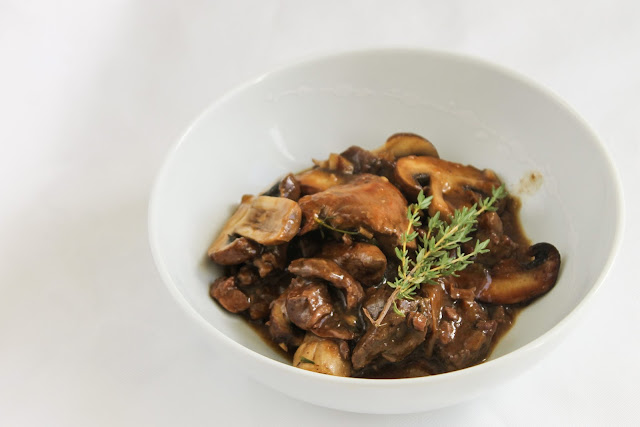 Soak the dried mushrooms in just boiled water for 10 minutes.  In the meantime, switch on a slow cooker to high.

Heat a frying pan and a third of the butter, slowly fry the chopped onion until softening and browning a little.  Add in the chopped garlic for a minute or so then put into the slow cooker with the two bay leaves and the soaked porcini with the soaking liquid.

Cook on high until all of the mix is bubbling well then switch down to low for approx 4 hours or until everything is tender.

When cooked, if your slow cooker is hot enough on high heat to thicken cornflour, turn to high, mix the cornflour with a little cold water to make a paste and when bubbling, add the cornflour mix.  Alternatively do on the hob.  While the stew is thickening, fry the sliced fresh mushrooms in the remaining butter and add to the stew with the thyme leaves.  Warm through until the fresh mushrooms are fully cooked, add a little seasoning to taste and serve.

I've never seen my son eat a stew so quickly.  He loved it.  What's more despite all the naughty butter I'm using here, that is over 3 portions and game meat itself is very lean and full of iron.  The mushrooms also help contribute to your 5 a day.