Quinoa, something I've come a little bit late to the party about really.  Whenever I'd seen it on a supermarket shelf, apart from being really expensive I'd wondered what the fuss had all been about but also filed it under "fad ingredient".  I'm not the kind of person who races towards the nearest "superfood".

However, I found a pack, it was much cheaper in price than I'd seen before and I tried it.  You know what?  It actually tastes pretty nice.  That was a surprise!

I paired it very simply with some griddled vegetables and a lemon vinaigrette.  Ok, not the healthiest thing due to the oil content but it tasted great and there are worse things in life to have than lots of lovely olive oil. 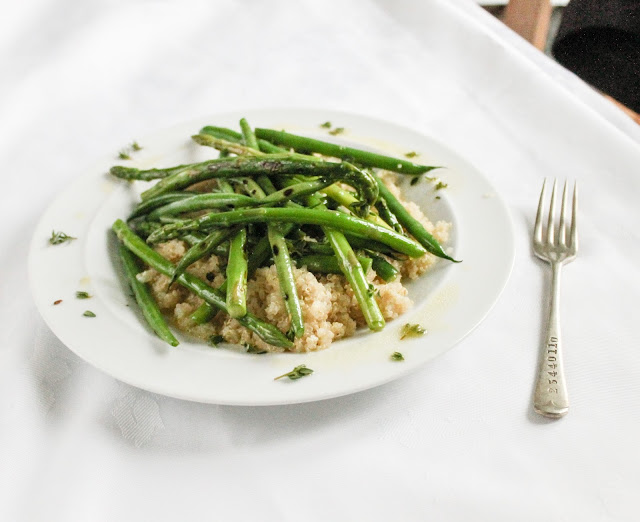 In the meantime, quickly cook the asparagus and green beans in rapidly boiling water for one minute.  (Put some water on a hob, bring it to a boil then plunge in the vegetables.)  Drain and cool down quickly under running cold water.

When the quinoa is nearly cooked, dress the vegetables with the tsp of oil and then griddle in a hot griddle pan until heated through and deliciously marked with the stripes from the pan.

Make the dressing by whisking the lemon juice with the mustard then slowly whisking in approx 1 tbsp of oil or to taste.  I tend to do this by eye.  Mix in the herbs. 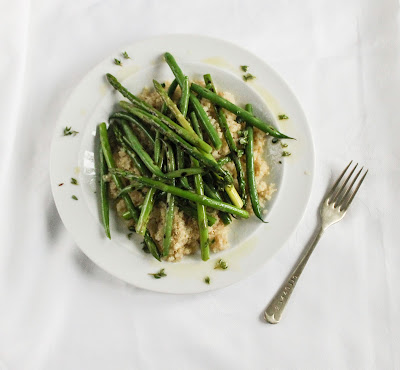 Serve by putting the quinoa on a plate, topping with the roasted vegetables and a drizzle of dressing.  Season with some crunchy sea salt crystals if liked.

There is something so middle class about quinoa it is such an internet meme (this middle glass graffiti particularly made me giggle). 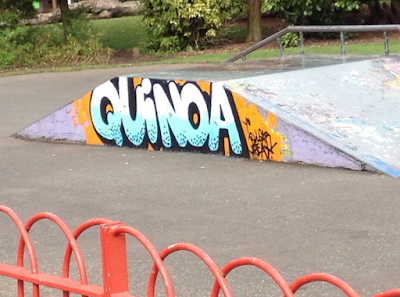 But give it a go, you may just be won over by it's protein rich charms!

Linked up to Pick and Mix Fridays.