Many newly single people will be embarking or considering a trip alone this summer and I know many will be nervous about the prospect. 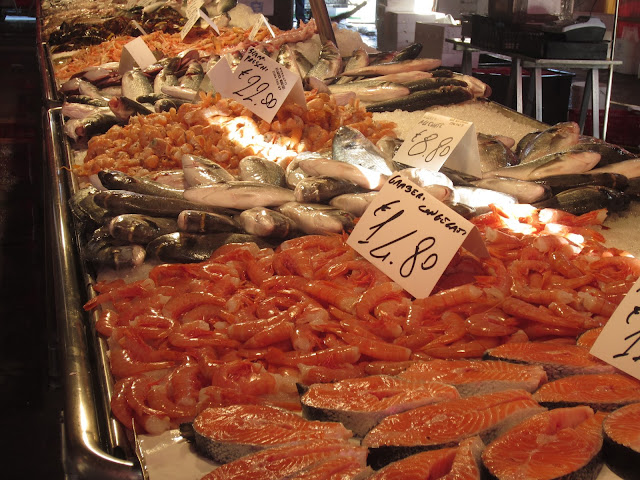 I've travelled alone quite a lot over the years so I thought I'd share some of my ideas and thoughts on it which might give you some confidence and to make it not just ok but one of the best holidays you can have.

You can do and see what you want to do.  Compromise is a good word but it's also compromising what you want to do.  Not a fan of extreme sports?  Then on a holiday on your own you are free to indulge your own passions, mine is obviously walking around market squares looking at produce and soaking in the atmosphere.  I'm also a fan of visiting ornate churches and eating nice food.  A fine display of fish is not a thing which gets many people excited apart from me!

You can work to your schedule.  If you're an early riser like I am, it can be frustrating waiting for others to wake up when you're on holiday.  I can happily be out of the hotel by 6 or 7am and see where I'm staying before the crowds descend.  This is how I managed to see St Mark's Square in Venice with hardly a soul to share it with.  The other joy is in hot countries, the weather in the morning can be beautiful, the hint of a fresh breeze can be so much more refreshing and you can always have a siesta later.

Research the area well.  I like researching where I'm going on holiday but when travelling alone it really helps ensure you will feel ok about the whole deal.  How will you get from the airport?  What is public transport like?  Just things like knowing where the more dubious areas in cities are (and aren't) can be very helpful as a lone female traveller.

Eat well at lunchtime if you're nervous about being out in the evening.  I read up about an area before I go but also see how it feels when I get there.  If I do feel a little nervous to eat out alone at night, I often have a larger meal at lunchtime instead so I don't miss out on the lovely cuisine.  I would then have a snack in the evening.  I'm not a fan of the hotel restaurant as a rule.  However good the restaurant is, it just feels like I'm not being sufficiently adventurous.

Check the flight times.  Flight times are everything.  I've made mistakes on this in the past and nowadays I often decide where I'm going from a short list by the flight times.  The best times for me are arriving in daylight or at least early evening and leaving around or just after lunch time.  Why?  After bitter experience arriving at Budapest at 10pm, I would always advise not arriving after dark if you can, or if you have to (or your flight is delayed), now is the time to splash out on a taxi and not, as I did, get yourself into a tizz of nervousness trying to use public transport when tired and unsure where you're going in the dark.  Likewise, when you're on your own, even with a huge selection of books, it's a pain returning in the evening.  Inevitably that last day just then gets focussed on the fact you're "going back later" and you end up doing far too much waiting around which can be tough on your own.

Top tip though if you do have a late return flight.  Talk nicely to the hotel you're staying at.  Even if the check out time is midday, ask them to hold onto your bag for you.  Take anything valuable with you that you'd be concerned about stealing (but ease up, no-one wants your flip flops) and leave it for the day.

Have a lot of good books.  I love to read and going on holiday on my own is one of those times I get to spend reading.  Even if you're not as much of an avid fan as me, a book is a good idea.  While you're waiting in line for a museum to open, it's the alternative to a long chat.  Waiter giving you a bit too much attention in a restaurant?  It's a bit of a barrier.  But that said...

Do talk to other people.  Ok, be sensible about it, especially if you're a lone female traveller but sometimes having a chat with some locals can be a great way of finding out what's good where you're staying or a little local flavour.  I once got chatting to someone in the Czech Republic after where I'd intended to stay was full for the night.  Having travelled in India and experienced the "oh no the hotel is full" scam I was naturally suspicious of anyone who said "I know of somewhere that has rooms" but to be fair, the person taking me did know where there were rooms and negotiated me a really good price in Czech and we chatted en route so I got to learn all about his town.

People watching is awesome.  From watching people playing chess in Eastern European bars to sitting back watching the streams of US tourists piling into Venice.  I love people watching and without anyone else there to say just when my mind is elsewhere "what are you thinking about", I can indulge myself!

Make sure you have a map.  Just practicality really.  It could be in a guidebook or separately but it does pay to have a map with you.  Be careful to look at it discretely as it does separate you out as a tourist.  But the great thing about travelling alone is...

Most of the time very few people will think you're a tourist.  I've been spoken to in Greek, Hungarian, Russian, Spanish, Czech, French etc. all by people assuming that I am that nationality which is great in my view.  Unless you're wearing a T-shirt proudly proclaiming your love of all things from your home country, chances are you will blend in a bit better than if you were in a couple or family.  Why is this good?  Well it makes it possible to see a place at least slightly through the eyes of the people who live there.  It makes people watching easier too.

Learn a few words of the local language.  It's polite and you never know when you might be somewhere they don't speak English.  Don't be lazy and trust me, there are countries where you need to know a few words (rural Hungary being one and Hungarian is a difficult language!)  Even if you don't need to, it is just polite.

The boring and sensible stuff.  Get good travel insurance.  Make sure people know where you're going and keep in touch while you're away.  But most of all, enjoy yourself.

The joy about travelling alone for me is I notice more.  I see things I never would have seen had I travelled with someone else whether that is from the US couple who (wordlessly) picked up and swapped their plates half way through their meals or the artwork which spawned a blog post about clean eating, the beach in Greece where ducks wandered freely around, the bride walking up the steps of the Rialto Bridge, hitching up her skirts to reveal converse boots, stumbling into the Liberation Festival in Plzen, drinking beer and eating sausages with the locals as we listened to a live Czech band.  I suppose in my own way I see travelling alone as an immersive mindfulness exercise if that doesn't sound too clinical.  I like travelling with other people but alone is when I really recharge my batteries and come back with a hundred stories to tell my loved ones.
Created by Heidi at 21:48:00