What idiot called it "alphabetti spaghetti" instead of "times new ramen"?

Why do they only have one egg for breakfast in France?  Because in France, one egg is an oeuf!

Two cannibals eating a clown, one turns to the other and says  "does this taste funny to you?" 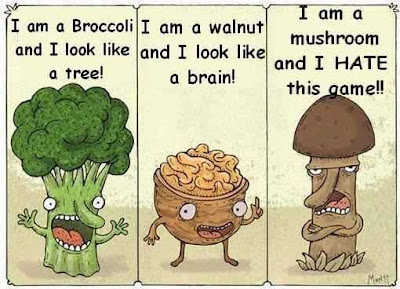 Strange new trend in the office.  People putting names on food in the fridge.  Today I had a sandwich called "Kevin".

I don't have any vegetable jokes yet.  If you do, lettuce know?

My friend thinks he's smart.  He said "Onions are the only foods which make you cry" so I threw a coconut at his face!

A hungry traveller stops at a monastery.  A brother sees he is hungry and starts cooking fries.  The traveller asks "are you the friar?"
"No, I'm the chip monk!"

One day you're the best thing since sliced bread; the next you're toast!

Do you ever get that when you're half way through a horse and think "I wasn't as hungry as I thought I was"?


Linked up to the healthy, happy, green and natural party hop.