The first time I had bearnaise sauce, I was an exchange student just outside Paris.  Glamorous though that sounds, the bearnaise was straight out of a bottle.  It was a few years later before I tasted the proper stuff.  For good reason, it's not commonly on a menu.  Imagine making an egg thickened sauce in a busy service kitchen.  Let's face it, even for the most experienced cook, it can go wrong.  With everyone else's food waiting, it's a massive risk... 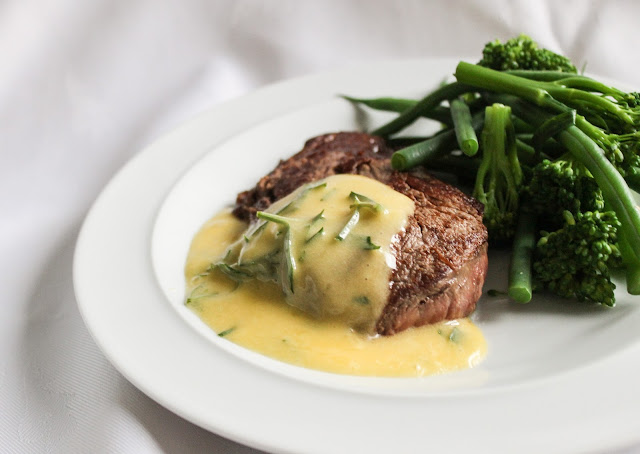 But this is where I'm going to make the crazy suggestion, making an egg thickened sauce like hollandaise or bearnaise sauce for one makes perfect sense.  The great thing with this recipe is the steak rests while the sauce is being cooked.

So I'm sure many of you would think "no, it's not for me" but genuinely, the flavour is amazing and I've put in a few tips to make it easier to cook for one.

I had such a hard week this week so this was the ultimate "well done to me".

A steak, ideally aged fillet, if you're going to make bearnaise there's no point having cheap steak
Olive oil

Finely chop the shallot and put into a microwavable jug with the vinegar and one sprig of chopped tarragon.  Heat in a microwave for 90 seconds.  Strain the liquid into a heat proof bowl which fits onto the top of a saucepan (not inside it), add a few drops of water.

Microwave the butter in a second microwavable jug until melted and leave to stand so the solids sink to the bottom.

Fry the steak to your liking and cook any vegetable accompaniments (or salad).  Steak benefits from resting on a warm plate which helps you concentrate on the sauce so cook it before starting to make the sauce or you will get in a muddle.

Heat a pan of hot water until steaming but below the boil.  Put the egg yolk into the heatproof bowl with the vinegar then put the bowl on top of the steaming saucepan.  Whisk until starting to thicken for a minute or so then add in the butter in a few drops building to a thin stream until all has been added apart from the white milk solids. 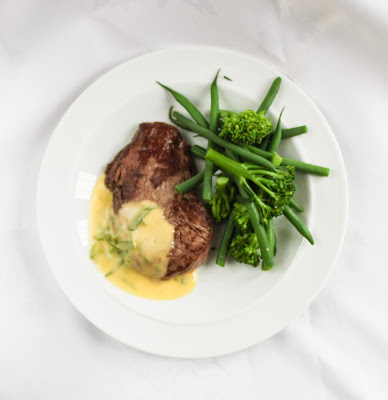 Take off the heat and whisk in lemon juice, the remaining chopped tarragon and salt to taste.  Serve with the rested steak. 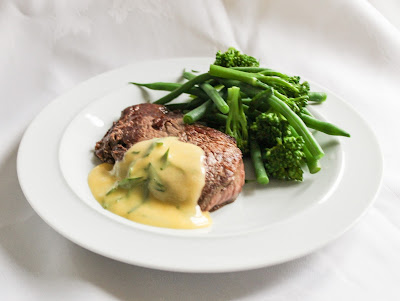 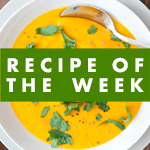