I want to change the world

I found this photo on the internet recently and posted it on one of my social media pages. 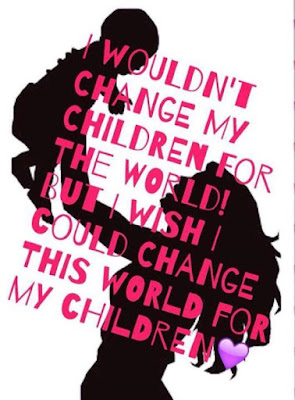 The outpouring of grief after the Paris attacks, I have to admit passed me by.  Not because I was unfeeling but because I was reeling from shock.  It's only now, nearly two weeks later, I feel floored by it.

I don't want to talk about the whys and the wherefores.  I don't understand them.  I have debated them internally for days not knowing what the answer is, what I would do if I was the leader of a country right now.  But I do know I feel scared, scared for my son, scared for the people I love that this is what the world has become.

I'm not Christian, I'm atheist but Christmas is now so much of a secular event that I do celebrate it.  I will, as I do every year at Christmas, give a present to one of the charities which means the most to me.  In previous years I've given to Shelter, Crisis and Homestart.  It's my way of giving a little love at Christmas time.  Please, in this horrible times, I urge you all readers to do something to give a little love.  It might not change the world but it might change one person's life and that is the world to them.
Created by Heidi at 07:30:00