Tips for a safe and brilliant barbecue

I remember when I was learning about food safety early in my career being taught there were peaks in food poisoning incidents which correlated with barbecue season and Christmas.  If you think about it, some of the reasons are the same.  We are sadly a nation of people who don't cook as much as we used to and let's face it, the person manning the barbecue is not always the most experienced chef. 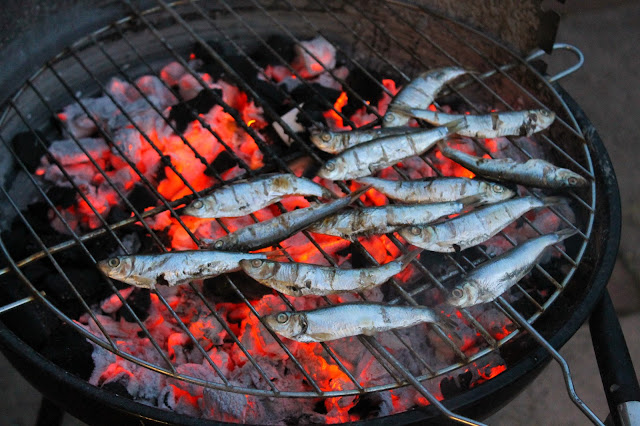 That said, some of the advice on cooking safely on barbecues does take the joy out of them (I'm not going to suggest cooking all the food in an oven first, I'm going to assume some common sense!)


Wash your hands between handling raw and cooked food

Only take the food outside when you're ready to cook it and then when it is cooked through and hot throughout, serve and eat as quickly as possible.  You want to avoid food hanging around being "a bit warm" because that's when harmful bacteria can grow.

Make sure your barbecue is hot before you start

You're looking for charcoal which hasn't got loads of flames but has a fine layer of ash over the surface.  At this point the coals are at their hottest and less likely to burn the outside with flames while leaving the inside raw.  You can adjust the heat by adjusting the height of the grill or push the coals to one side so you are cooking over indirect heat if liked.  Make sure you turn the food regularly so you can see if it's cooking too quickly and make sure it cooks as evenly as possible.

Disposable barbecues can be not as hot

Because they often have smaller coals and not as many of them, disposable barbecues often don't get to high temperatures and don't last as long.  If you're using a disposable, I'd stick to thin, easy to cook foods which cook quickly like small fish, vegetables and thin sausages.

Make sure frozen food is defrosted thoroughly before cooking

Ideally plan in advance and defrost in a refrigerator.

What is it with people washing chicken?  It is a thing which is common in some cultures but I don't get it.  You know when you wash your hands, sometimes you get water droplets on your t-shirt which have splashed from the tap?  For the ones you see there will be microscopic ones you can't.  The same thing happens when you wash chicken, except now the droplets are all over you, your kitchen, your sink.  It makes no food safety sense and doesn't make the chicken any safer.

Most foods need to be cooked through

I include burgers here.  Sorry to be a killjoy and I know there is a trend for rare burgers but you need to accept there is a risk of food poisoning, particularly the dangerous forms of E Coli from eating a rare burger.  Some restaurants use special preparation techniques for the mince to limit the risk but if you're making them at home or buying them pre made, it's safe to assume that you can't be sure they're safe.  The reason why burgers can be a problem is because the surface of meat can get contaminated as it's butchered.  When you mince the beef some of the surface goes to the middle.  With steak though as long as the outside is cooked, the risk is minimised so it's much lower risk to have a rare steak than a rare burger.

Chicken obviously has to be cooked through but this is less scary to check than it seams.  Just chose your cut carefully (I often use skin on chicken thighs which don't dry out if you overcook them) and cook over a low heat until cooked through checking by cutting in and seeing no pink left or by using a temperature probe (to reach a minimum of 72oC for 2 minutes.)

Use separate plates and utensils for raw and cooked

Or wash them thoroughly inbetween,  Don't put on raw foods as you're about to take something off the barbecue which is cooked or you can end up dripping raw juices onto the cooked item.

Once you've taken food out of any marinade, take the dish back to be washed (or give it to a willing helper!)  This then avoids the risk of basting with the marinade just before taking the food off the barbecue or even using it as a dressing (believe it or not some people really do this!)

Salads and desserts should only come out just before they're eaten.  If you're having a large party which is likely to go on for a while, why not bring out the salads in batches as they'd be more tasty and crisp anyway?

Obviously don't barbecue indoors and make sure the area you do cook in is well ventilated and doesn't have any things around the barbecue which are likely to catch fire.  Make sure once it's lit that it's not left unattended.

Now I've gone through the safety stuff, what about some great recipes for the barbecue?
Created by Heidi at 07:08:00